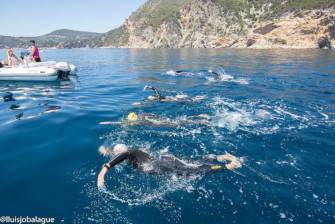 On Saturday 1st February, the registration period opened to participate in the fifth edition of l’Oncoswim, the sports and solidarity challenge organized by the Fundació Oncolliga Girona and the CN RadikalSwim, which consists of swimming in teams of four people along the 30 km that separate the beaches of l’Estartit and Calella de Palafrugell.

The competition will be held on 6 June and aims to raise funds to finance a research project promoted by the Universitat of Girona (UdG) on triple-negative breast cancer. Since the first edition, 96,000 euros have been raised for this research.

Registrations have also been opened for the Milla Solidaria, the most popular version of l’Oncoswim, which consists of swimming the Via Brava stretch from Llafranc to Calella de Palafrugell (approximately 1.6 km).

If you would like to participate in this solidarity event, please do not hesitate to register and reserve accommodation in one of our fantastic apartments by clicking on the following link.

You can find out more about which cookies we are using or switch them off in settings.

This website uses cookies so that we can provide you with the best user experience possible. Cookie information is stored in your browser and performs functions such as recognising you when you return to our website and helping our team to understand which sections of the website you find most interesting and useful.